All Of The Different Ways To Summon An Uber 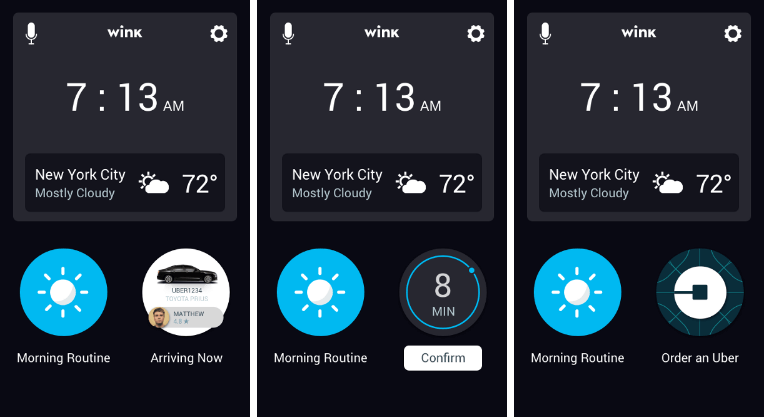 Wink is a one-stop smart home control that can dim the lights, lock the door, and change the temperature. And now, starting on June 28, it can also hail an Uber.

Smart homes are far from ubiquitous. Controlling everything with a top of a screen still feels like a far off future. But when that future becomes a reality, Uber wants to be integrated into every piece of the future that it can.

For Wink, all you have to do is log into your Uber account and it’s ready to go. The small home screen that controls a Wink owner’s lights also confirms a ride, shows how much longer until arrival, the driver’s name and picture, and even the make, model, and license plate of the car. For now, Wink will also show if there is surge pricing, but that may be getting phased out.

If you book the ride on your phone, it’ll automatically show up on the Wink screen as well.

Essentially, Uber’s Wink app is the same as Uber’s smartphone app. It’s a smart ploy for Uber to gain an advantage over Lyft (or whoever wants to purchase Lyft). There’s an Uber for everything, and Uber is trying to ensure that an Uber can be summoned anywhere.

Here are all of the ways that a person can hail an Uber besides using the smartphone app.

People needing a ride have been able to hail an Uber from the Facebook Messenger app since December as part of the service’s push toward helping customers interact with businesses.

The transportation feature on Messenger allows anyone with the app to “request a ride from a car service without ever needing to download an extra app or leave a conversation.”

To summon an Uber within a conversation you are having with someone, simply hit the more menu and then tap the Transportation option. Alternatively, start up a conversation right with Uber (which was Messenger’s first business partner — just another sign of the aggressive integration Uber aims for).

Users then simply tap the car icon for a ride and they get updates on the driver, tracking the ride, and paying for the ride in the Messenger app. You can even send the ride to your friends to let them know when it’s coming.

Amazon Echo and it’s artificially intelligent personal assistant Alexa is one of the most popular smart home utilities. It’s still not widespread, but people who do have it can call an Uber simply by using voice commands.

Uber’s pairing with Alexa in February was the first time that a person could hail a ride using on their voice. All a person has to do is make a simple verbal request:

After that, people can ask where the ride is and Alexa verbally updates where the driver is.

After Uber opened up the doors for verbal ride hailing, one of the most well known, voice-activated personal assistants jumped onboard as well: Siri.

Since June, all an iPhone user has had to do is ask Siri to request a ride and an Uber will come. Siri already knows your location, has your Uber information, and can give you real-time updates. When the new iOS 10 comes out in the fall, it will be even easier for people to quickly confirm, contact, and pay their rider through a home screen animation.

Uber, as was the case with Wink, was one of Apple’s first jumps into working with third-party app developers to integrate services.

Both maps services for iOS and Android offer a way for users to summon an Uber without leaving Maps.

The feature will be similar when Apple releases iOS 10 for the iPhone in the fall.

All of Uber’s transitions to other apps have come after December 2015. There’s a good reason for that — Uber opened itself up to any developer that wanted to include Uber in its own app on December 2.

With the Uber Ride Request Button, app developers can include a one tap summon service with just a few lines of code.

“By adding the button next to every address or ‘intent to ride’ in your App, your users will be able to tap to instantly get a ride to the hotel, restaurant, movie theater or any other destination you specify,” Uber writes in a blog post explaining the feature. “This will help you offer a differentiated feature for your users, provide a magical experience for riders and even earn additional revenue your business.”

So what is the next way you can summon an Uber? Whatever jumps on the Uber train next.