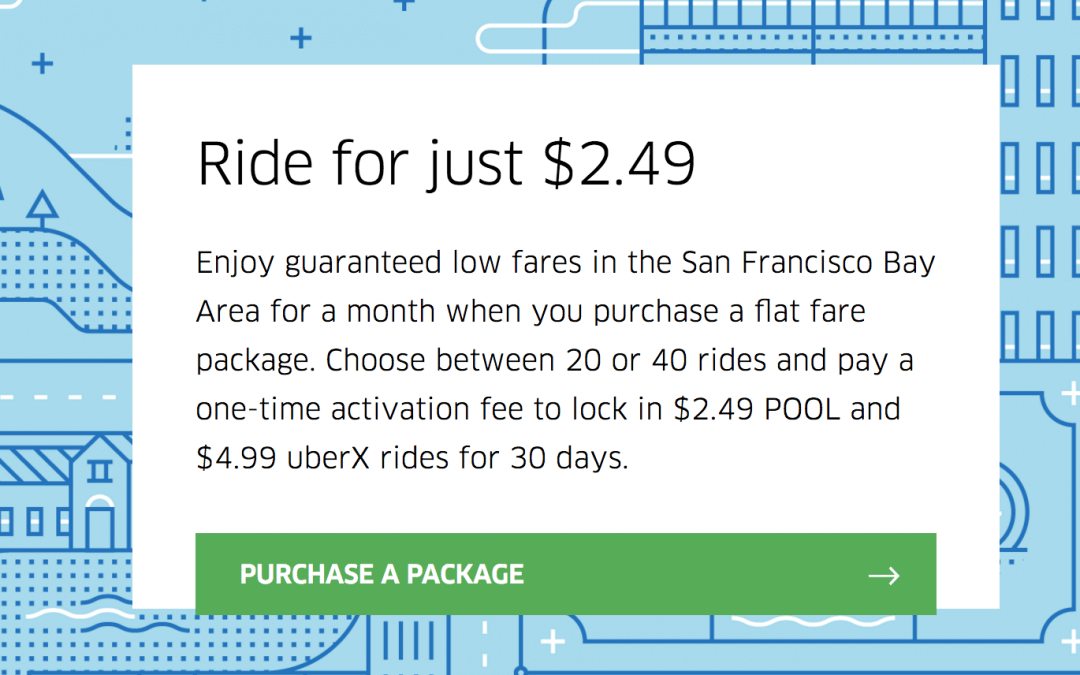 You can purchase in the Uber app under the flat rate tab or above on their website.

Uber is offering a sweet deal to passengers in San Francisco for October — pool rides for a flat rate of $2 and solo UberX rides for $7.

The move comes after similar experiments with flat rate pricing rolled out earlier this year in downtown Toronto and in Manhattan — for passengers, a welcome departure from Uber’s reviled practice of surge pricing, i.e. adjusting fares based on demand at any given time. In those cities, passengers can get a $5 flat rate for UberPOOL rides — shared with other passengers — within certain geographic boundaries and times. In addition, flat-rate passengers in Manhattan have to be willing to be picked up and dropped off at street corners that could be a short walk away.

But the latest deal being offered in San Francisco, where Uber was launched and where its world headquarters are located, is even better, with the option of getting flat rates of $2 (UberPOOL) and $7 (UberX). The trips can be taken anytime during September, as long as they take place north of Cesar Chavez St., a wide area that encompasses the most populous part of the city. In order to lock in the rates, passengers have to buy upfront either a $20 or $30 package, for up to 20 or 40 trips respectively. The only apparent catch is that in the case of trips that cost more than $20, based on distance and time, passengers will have to pay the excess amount.

Uber did not indicate how its drivers would be paid for trips during the San Francisco promotion, but in other cities where the company has tried out flat rates, it’s paid drivers the standard rate based on the distance and time of the ride.

The San Francisco offer may be one of Uber’s most ambitious yet to both attract customers and to try pricing models that veer away from the dreaded surge — something that, Gett, one of Uber’s NYC competitors, has used to hammer the company.

Uber itself has acknowledged that surge pricing is problematic. As a National Public Radio story recently noted: “While drivers see surge as a key feature of the job — and Uber advertises it as such to them — inside the company surge pricing is considered a market failure, a problem to be solved.”

But considering how costly it could be for Uber, it seems unlikely that the San Francisco promotion next month will be replicated in the hundreds of other cities where the company operates.