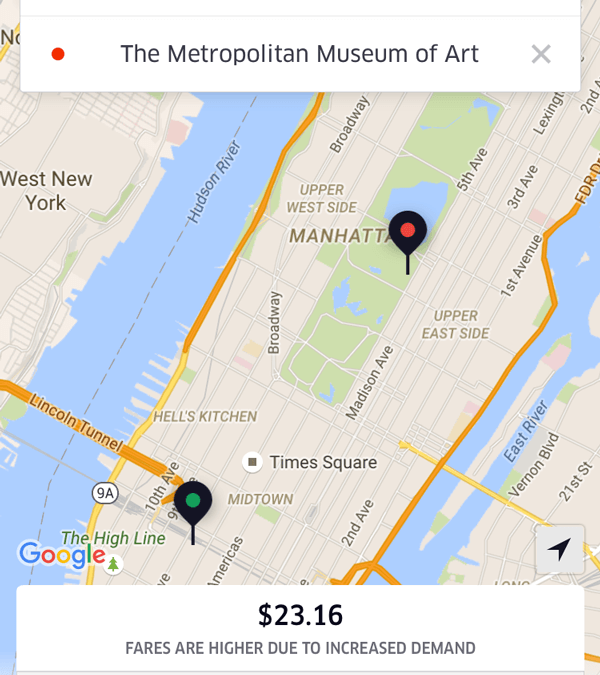 Starting today, Uber will have riders put their destination into the app while hailing a ride and the screen will show an upfront price. The biggest change for riders is that they will no longer clearly see surge pricing displayed.

Surge pricing has defined Uber since it’s inception. It is the free-market solution to the problem taxis had (and have) of providing enough cars when there is a high demand for rides, and judging by Uber receiving billion-dollar investments and proliferation in markets across the United States, Latin America, and now China, the concept has worked.

Surge pricing encourages drivers to get out on the road, but on the passenger side surge pricing is easy to hate. The familiar message of “Demand is off the charts! Fares have increased to get more Ubers on the road.” signaled that if a passenger could wait for a ride, that was the time to do it.

Now, Uber drivers will see an upfront fare of a final price after entering their final destination. The company is billing the change as “no math and no surprises.” Rather than the aforementioned message, a single line stating “increased demand” will be under the final fare.

“Upfront fares are calculated using the expected time and distance of the trip and local traffic, as well as how many riders and nearby drivers are using Uber at that moment,” Uber product managers Arundhati Singh and Dennis Zhao write in a blog post. “And when fares go up due to increased demand, instead of surge lightning bolts and pop-up screens, riders are given the actual fare before they request their ride. There’s no complicated math and no surprises: passengers can just sit back and enjoy the ride.”

Uber first started showing upfront fare prices two years ago with uberPOOL. Riders needed to put their destination in ahead of time to pair with other people they could potentially share a ride with. That meant that Uber could figure out what the fare is before hand, which is something that Uber claims people really enjoyed.

Upfront fares make Uber pricing like hotels and airlines, Uber states. Both of those prices adjust based on demand, but customers don’t see how much the price was adjusted, they just see the final price. Riders will also no longer be notified when surge pricing had gone down.Hence the “no math” part of Uber’s explanation.

The first upfront prices for the standard uberX ride started in New York City, Miami, San Diego, Philadelphia, Seattle, and New Jersey in April. Uber states that hundreds of thousands of riders have already experienced upfront fares. Judging by the move to change things across the board, it was a success.

Part of the reasoning behind the switch is that surge pricing has become a normal part of getting a ride from a ride-hail app. Uber popularized the concept, and through its ubiquity, has made surge pricing a universal and expected part of hailing a ride via app.

That doesn’t mean it’s popular — Uber faced criticism for surging during natural disasters and emergencies. The company has responded by capping the surge price during events when people desperately need rides (such as the recent tragedy in Orlando).

Uber’s CEO Travis Kalanick has said in the past that showing the surge pricing multiplier was an act of transparency for customers. While the current change makes the final price more transparent,  how high the price was surged becomes less transparent. Drivers will still be alerted to where surge pricing is in effect, however, keeping the balance of supply and demand that Uber has built.

The move may help riders forget when they are being charged more, but it doesn’t change the dynamic pricing that set Uber apart in the first place.